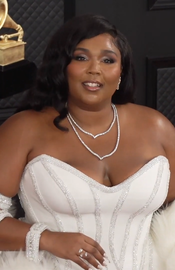 Melissa Viviane Jefferson, known professionally as Lizzo, is an American singer, rapper, songwriter, and flutist. Born in Detroit, Michigan, she later moved to Houston, Texas, where she began performing,... Wikipedia